The History of The PSTN

Respoke gives you the power to build the next Skype in the browser, on your smartphone and even on your desktop. It’s all possible because of the Public Switch Telephone Network (PSTN). Here’s a look at where the PSTN has been and where we’re taking it…

HISTORY OF THE PSTN

The first voice transmission used what is called a ring-down circuit. What that means is there were no dialing of numbers; No ringing of headsets. Instead, an actual physical wire connected two devices. Remember when you were a kid and you’d play tin can telephone. What did you do? You connected two tin cans by wire. Then you could here your friend talk on the other end. A ring-down circuit is a lot like playing tin can telephone, just over a greater distance.

Initially, telephone users had to whistle into the phone to attract the attention of another telephone user. Within a year of Alexandar’s patent, he added a calling bell to make signaling easier.

Moving the voices across the wire required a carbon microphone, a battery, an electromagnet, and an iron diaphragm. The concept of dialing a number to reach a destination still didn’t exist. The also process required a physical cable between each location that the user wanted to call. Clearly this does not scale…

Placing a physical cable between every household that required access to a telephone was neither cost effective or feasible. Bell developed another method that could map any phone to another phone without a direct connection. Bell patented the device and called it a switch.

Imagine a pair of copper wires running from every phone to a central exchange in your town. At the exchange, the operator had a big switchboard. The switchboard had a 2 pin connection socket - called a jack socket - for every pair of wires entering the exchange.

Believe it or not, the first operators were teenage boys. Surprising - I know - but they often engaged in horseplay and foul language: 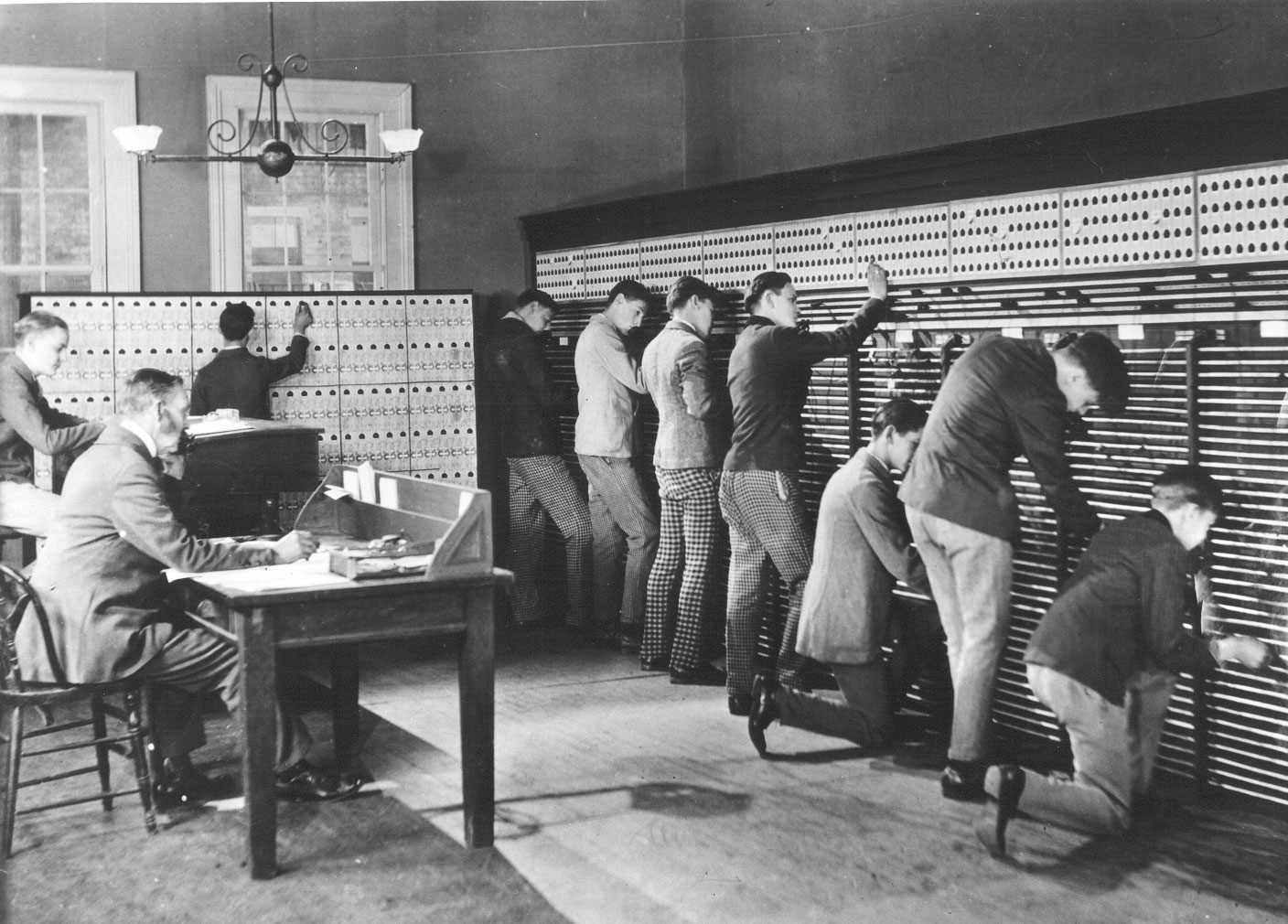 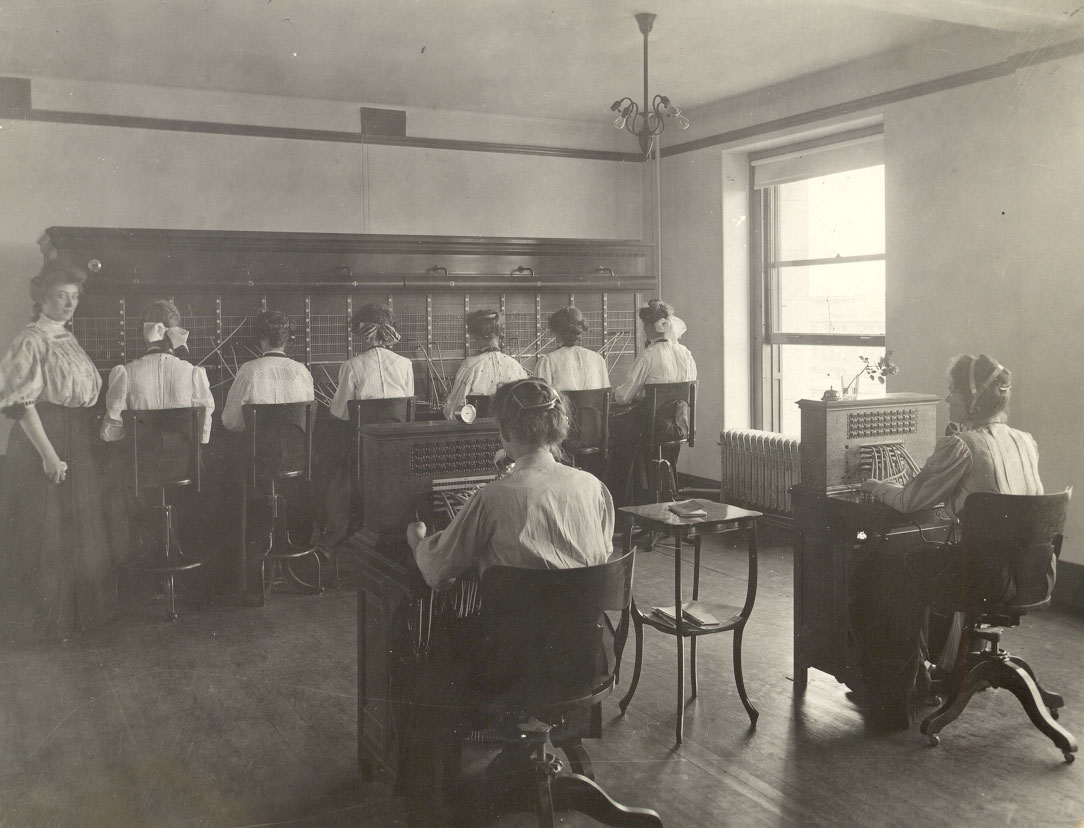 Here’s another group of operators at a switchboard in Santa Fe, New Mexico 1921: 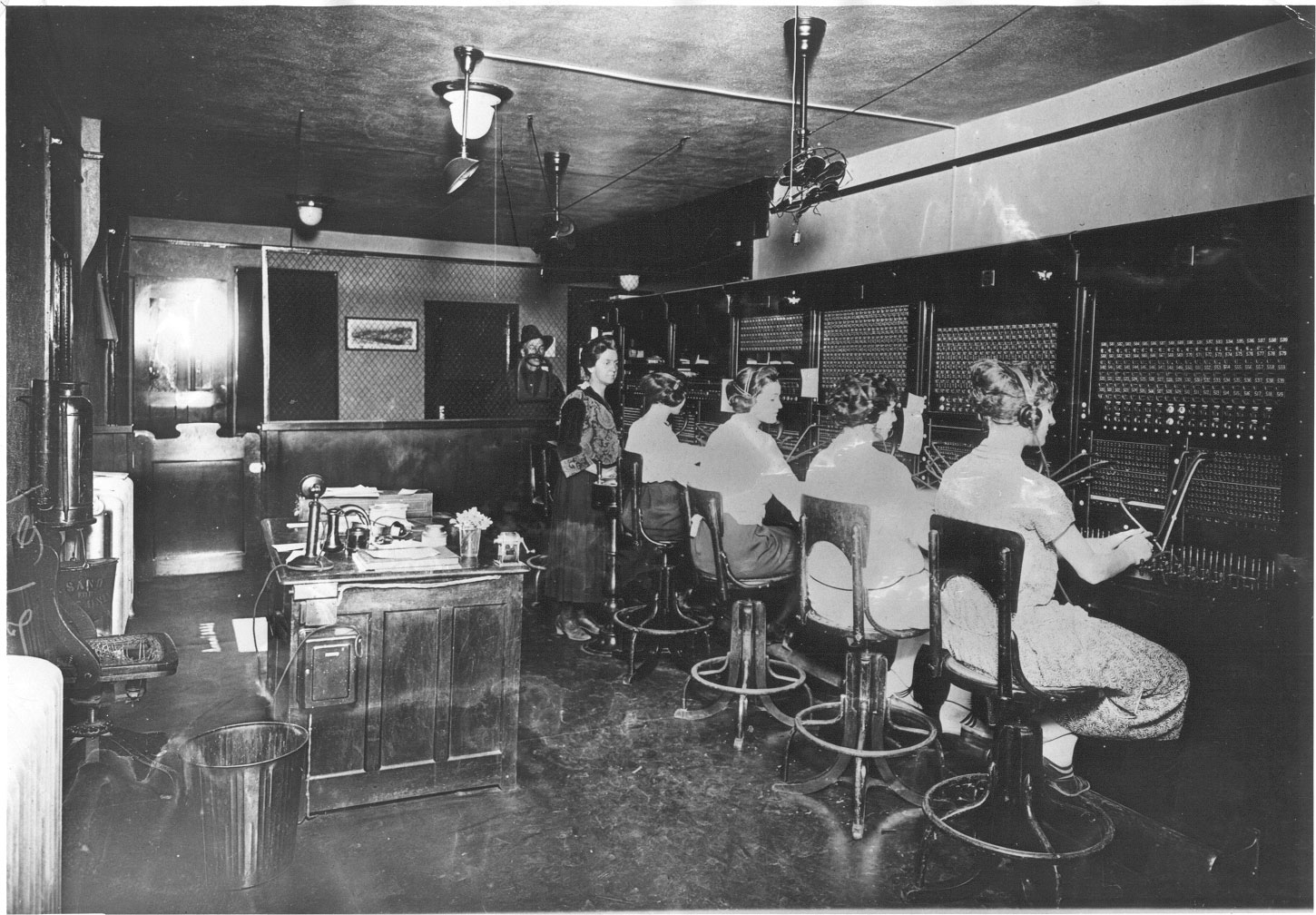 Bundles of wires called trunks ran between exchanges, forming proto-networks. Networks connected together until they connected countries across the world. This was the beginning of the PSTN.

At first the telephone operator acted as a switch. Fast forward 100 years - give or take a decade - and the electronic switch replaced the human switch.

What started as direct home to home connections, evolved into home to central switch connections. Human powered switches we called operators evolved into analog switches and then into electronic switches. A lot also changed along the way. 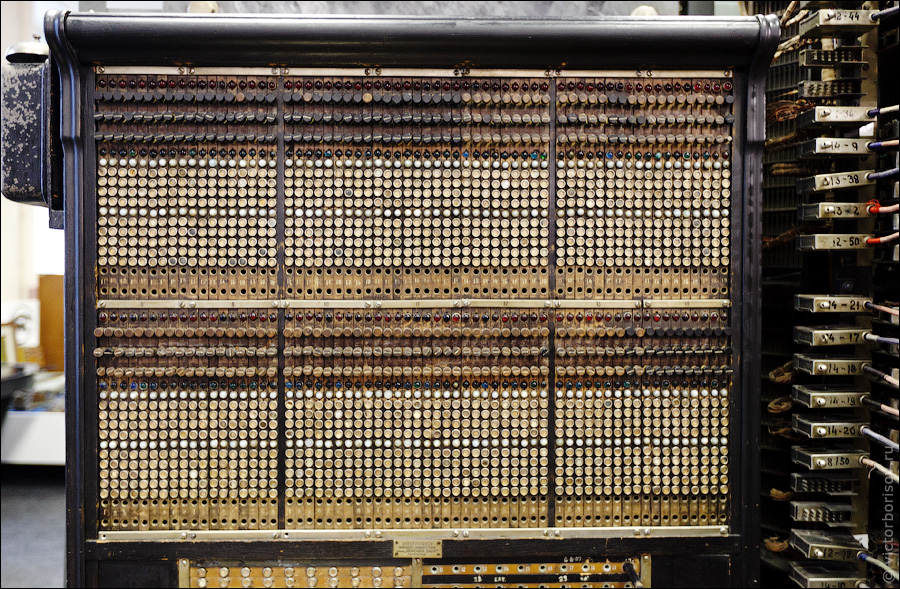 As technology progressed, the telephony industry found an alternative to message formats and during the dawn of the Internet a new transport format was invented - packets. This formed the foundation of what would become a separate data network.

Currently H.323 is the most widely deployed VoIP call-control protocol. H.323, however, is not widely seen as a protocol that is robust enough for PSTN networks. For these networks, other protocols such as Media Gateway Control Protocol (MGCP) and Session Initiation Protocol (SIP) are being developed.

Phone numbers in particular are fascinating. Phone numbers are simply different across the globe. To bring the point home, take a look at a few numbers across locales:

AT&T developed the North American Numbering Plan in 1947 to simplify and facilitate direct dialing of long distance calls. Implementation of the plan began in 1951.

In the NANP countries, for example, we have 10-digit phone numbers:

** The next three digits are the exchange, which represents the smallest amount of circuits that can be bundled on the same switch. In other words, when you make a call to another user in your same exchange - maybe a neighbor around the corner - the call doesn’t have to be routed onto another switch.**

** The last four digits of the phone number represent the subscriber number, which is tied to your specific address and phone lines.**

Within a company or larger organization, each employee or department might have its own extension. Extensions from the main phone number are routed through something called a private branch exchange (PBX) that operates on the premises. To make an international call requires further instructions.

Almost all exit codes are either 00 or 011, although there are a few exceptions like Cuba (119) and Nigeria (009). Country codes are one - to three-digit prefixes that are assigned to specific countries or groups of countries.

No doubt you’ve heard the term PBX before. A PBX or Private Branch Exchange is a small telephone switch - think of it as a mini exchange.

Businesses install PBXs to reduce the number of phone lines they need to lease from the telephone company. Imagine that without a PBX, you would have to to rent one telephone line for every employee with a phone.

With a PBX system, you only need to rent as many lines from your telephone provider as the maximum number of staff making external calls at one time. In most businesses this is only about 10-12% of the workforce.

What you didn’t know is before the tangled mess of PBX’s gone by:

There were human powered switchboard operators in businesses, government and large commercial buildings: 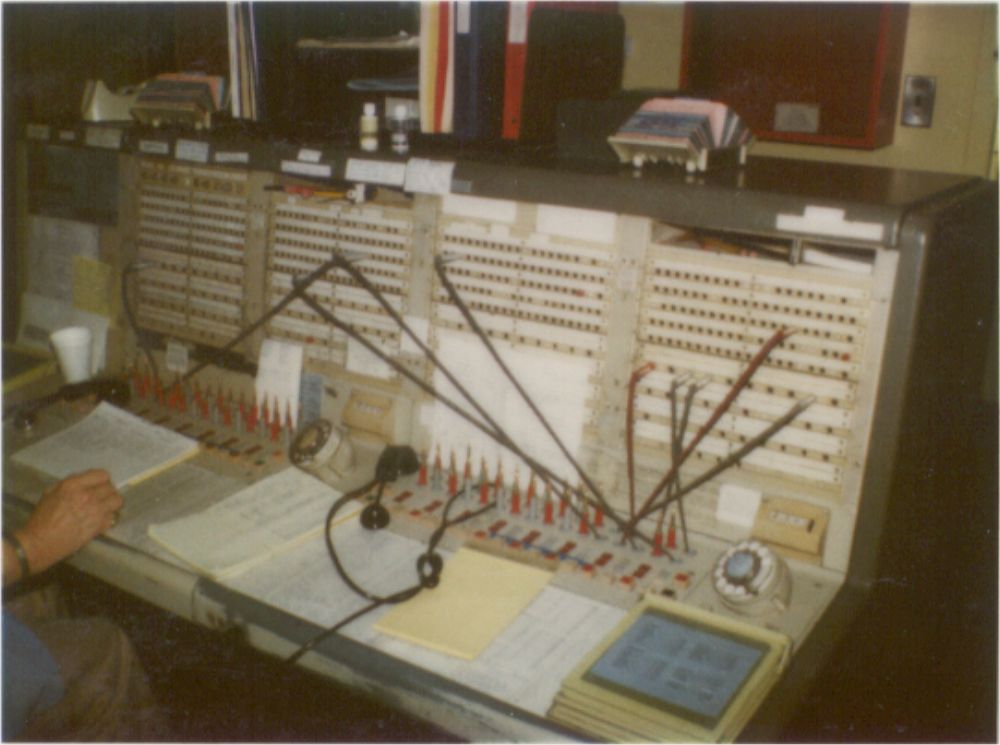 Of course, not even remotely as large as your local switchboard would be. Here there were usually anywhere from 2-4 people at most: 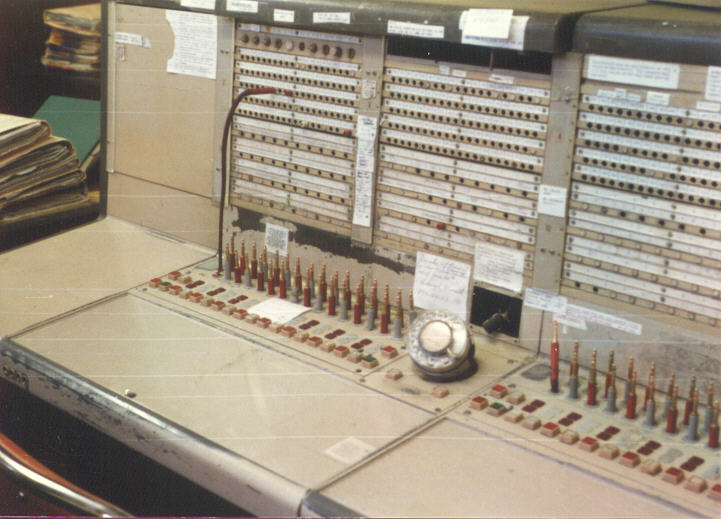 In the PBX system, every telephone in a business location is wired to the PBX, using either standard cables or more recently Cat 5 ethernet cabling. When a member of staff picks up their phone and dials the outside access code (usually 9), the PBX connects that person to an outside line, and onto the PSTN.

PBX solutions themselves have gone from a consortium of wires and frames to a single commodity hardware or higher grade application running open source software that allows you to create a virtual PBX.

Open source software like Asterisk is an example of this paradigm shift. With Asterisk you can create a PBX, an IVR system, a conference bridge and virtually any other communications app you can imagine. Asterisk was one of the first open source PBX software packages.

Asterisk supports a wide range of Voice over IP protocols, including the Session Initiation Protocol (SIP), the Media Gateway Control Protocol (MGCP), and H.323. Asterisk can interoperate with most SIP telephones, acting both as registrar and as a gateway between IP phones and the PSTN.

The PBX has gone from a tangled mess of wires to software running on commodity boxes to a hosted PBX in the cloud. The web was only the natural progression.

You can use Respoke to make phone calls and receive phone calls from phones on the PSTN as well as other Respoke client endpoints. It’s easy…

Using a combination of WebRTC media channel and good ‘ol fashioned ingenuity, Respoke takes your IP based voice data and converts it into digital SIP data which can be consumed by regular phone devices.

Of course you can do a lot of other things with Respoke as well. Like video, voice and text communications. Now you have access to the PSTN network as well. Sky’s the limit from here on out.